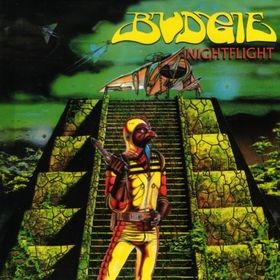 The strongest of Budgie's three 80's albums, but still an album that pales in comparison to the band's first five studio LPs.  Nightflight presents a refinement of the arena metal sound that the group introduced on Power Supply, combining that record's 'big-sounding' rockers with earthier 70's hard rock sensibilities (a la In for the Kill and Impeckable).  More importantly, the band has cleaned up the flat production that sucked much of the life out of Power Supply, giving the layered guitar-led arrangements more room to breathe and making the music sound far less generic.  Nightflight also delivers a pair of standouts that should please any Budgie fan in 'I Turned to Stone' and 'Apparatus'.  The first of those tracks is a 6+ minute builder with an absolutely scathing instrumental bridge/outro, while the latter is an acoustic-driven piece that actually improves upon the band's trademark folky 'ballads'.  Unfortunately, the remainder of the album is extremely lacking in memorable hooks, as if the band's creative spark had suddenly went out (only 'Keeping a Rendezvous' remotely sticks with me).  As such, although I was tempted to drop 3.0 stars here on the strength of the two highlights, and just couldn't justify going any higher than an 'average' 2.5 star rating for an album that I'll never listen to again.  I suppose that makes Nightflight one of those unfortunate records that is far less than the sum of its parts.

Longtime Budgie fans might want to check this one out on the strength of the two tracks below.  Everyone else is best advised to stick with the band's first five albums, although Nightflight certainly won't waste your time if you can (miraculously) find it for super cheap.  If nothing else, it's a more satisfying release than its disastrous 'crossover' follow-up, Deliver Us from Evil.

You are an unconditional fan of BUDGIE ? Check if you have all the collection.
If you just want discover a little more, the list below will help you.