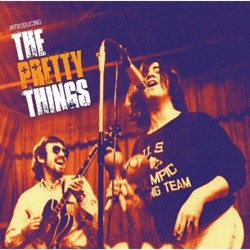 The Pretty Things created some of the most exciting and innovative records of the mid to late sixties and early seventies. The band were recently awarded the Hero award at the Mojo Honours and have been name checked over the years by an array of artists ranging from The Clash, David Bowie and Aerosmith through to The Libertines and Kasabian. The band first burst onto the scene in 1965 with a blend of raw, explosive R&B. Over the course of several albums they evolved into psychedelic pioneers, releasing the first ever rock opera, with SF Sorrow, in 1968. They followed this with 1970's Parachute, which was named Rolling Stone’s album of the year (ahead of Let It Be, Bridge Over Troubled Water, Atom Heart Mother and Led Zeppelin III). This 2CD set collects highlights from throughout their long career to offer a perfect introduction to the band's sound. The set has been compiled by the band's manager Mark St John who has also written new sleeve notes for the release, detailing the history of the band.

You are an unconditional fan of PRETTY THINGS ? Check if you have all the collection.
If you just want discover a little more, the list below will help you.