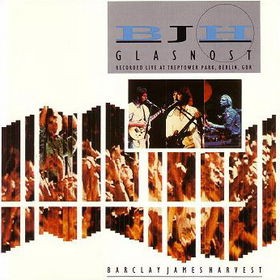 Barclay James Harvest was formed in 1967, and recorded one single for the Parlophone label, 'Early Morning', in 1968, before signing to EMI's new Harvest label, which was named after the band, in 1969. They recorded four albums for Harvest, including the classic Once Again' (1971), which featured the prog-rock anthem, 'Mocking Bird'.

Switching to the Polydor label in 1973, the band began to break through in the UK market with albums such as 1974's Everyone Is Everybody Else and Barclay James Harvest Live (their first Top 40 album). A series of chart albums and sell-out tours followed, and by 1977 the band had broken through into the German market with the album Gone To Earth, which stayed on the German chart for more than three years and spawned the single 'Hymn', which remains one of the band's most popular songs to this day.

The first major change to the line-up was in 1979 when Wolstenholme left, citing his musical dissatisfaction, to start a solo career. He was not replaced, the band electing to continue as a trio augmented by session musicians such as Kevin McAlea, Colin Browne and Bias Boshell.

Whilst their popularity in Britain waned after Wolstenholme's departure, the band scored numerous successes elsewhere in Europe, culminating in an enormous free concert on the steps of Berlin's Reichstag which was attended by 175,000 people. The live album of that concert went straight to number 1 in Germany and achieved gold status, as did many of the band's albums through the late seventies and eighties, including XII (1978), Eyes of the Universe (1979), Turn of the Tide (1981), Ring of Changes (1983), Victims of Circumstance (1984), Face to Face (1987), Welcome to the Show (1990) and 1992's TV-advertised Best of Barclay James Harvest.

By the mid-1990s success was harder to come by, and 1993's Caught in the Light and 1997's River of Dreams failed to chart, whilst concert attendances were well down. The band's 1997 tour of Germany and Switzerland proved to be their last, with John Lees re-joining Woolly Wolstenholme in a new band, 'Barclay James Harvest Through The Eyes Of John Lees', and Les Holroyd and Mel Pritchard joined by ex-members of Sad Cafe and Monroe in 'Barclay James Harvest featuring Les Holroyd'. Mel Pritchard very sadly passed away in January 2004.