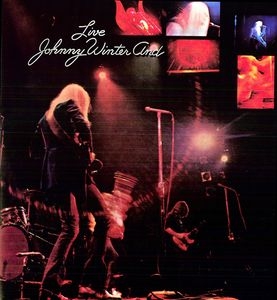 In its time, this was an enormously popular live album, especially among high-school kids just starting to discover blues-rock in the early '70s. Derived from live performances at the Fillmore East and at Pirate's World in Dania, FL, it is probably, in fairness, the best representation of Johnny Winter's sound from his prime years that one is likely to find -- the pity is that it's only about 40 minutes long, and is weighted very heavily toward Winter's covers of well-known rock & roll numbers. Considering that it was recorded along a tour promoting the Johnny Winter And album, one would expect that the band would have done a considerable number of tracks from that record, none of which are represented here. The highlights are of considerable value, however, including a searing rendition of the Stones' 'Jumpin' Jack Flash' sandwiched between some much older repertory ('Great Balls of Fire,' 'Long Tall Sally,' 'Johnny B. Goode,' etc.). Except for the opener, 'Good Morning Little School Girl,' on which Winter and the band try to show how many notes they can hit as quickly as they can, the players generally try for something a little more subtle and interesting, and one wishes that more of what they did had used the slow blues groove they settle into on 'It's My Own Fault.' Their version of 'Great Balls of Fire' has some of that, mostly by default (no one did the song faster than Jerry Lee Lewis anyway), and also enough energy so one doesn't even 'miss' the piano one usually expects somewhere in the song; 'Long Tall Sally,' by contrast, kicks in on overdrive and takes off from there. But for all of the musical virtues (and obvious joy) that Winter and company bring to those standards, the most interesting cuts here are 'It's My Own Fault' and Winter's own 'Mean Town Blues,' and one wishes that there were more such tracks here. In that regard, it might be worthwhile for someone at Sony/Legacy to do a serious vault search and see if there are surviving tapes of any other numbers recorded from the two shows (and was it just two?) that were recorded for this album.