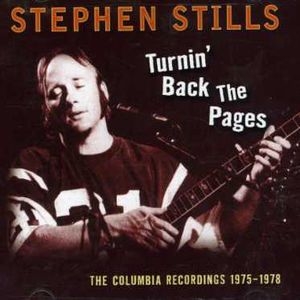 Turnin' Back the Pages

Australian reissue label Raven fills in a hole in Stephen Stills' catalog by assembling the compilation Turnin' Back the Pages, which surveys Stills' three-LP stint on Columbia Records, 1976-1978. The first two of Stills' Columbia albums, Stills and Illegal Stills, have been issued on CD, but the third, Thoroughfare Gap, has not, so the selections from that disc are making their digital debut here. The 78-plus-minute CD contains more than half of Stills' Columbia output, seven of ten tracks from Stills, eight of ten from Illegal Stills, and five of 12 from Thoroughfare Gap. Annotator Glenn A. Baker (who conceived and compiled the collection) points out that Stills' solo recording career at the time was damaged by a confusing glut of product: in 1975, Stills had to compete with Stills' Live album, issued by Stills' previous label, Atlantic; in 1976, Illegal Stills had both the Stills-Young Band's Long May You Run on Reprise and the Atlantic best-of Still Stills: The Best of Stephen Stills to contend with; and Crosby, Stills & Nash re-formed for Atlantic's CSN in 1977, which undercut the impact of 1978's Thoroughfare Gap. This is true, but it should be pointed out as well that Stills was contributing songs to the Stills-Young and CSN records, in some cases better ones than he reserved for his solo discs. 'As I Come of Age,' actually a CSN track from an abortive 1974 session, and 'Turn Back the Pages,' Stills' only charting single on Columbia, were up to his usual standard, but the Columbia albums also found him doing a fair number of unnecessary covers (Neil Young's 'New Mama' and 'The Loner,' Gregg Allman's 'Midnight Rider,' Buddy Holly's 'Not Fade Away') and even letting co-writer Donnie Dacus take over lead vocals on 'Closer to You' and 'Ring of Love.' Certainly, there are passages on these sides that remind the listener of Stills' talents as a guitarist and songwriter, but much of the time he seems to have been putting only his second-best efforts into his solo recordings. The Raven collection chooses well (and the decision to end with two tracks from the 1968 Super Session album with Al Kooper is wise), but there is too much weak material here for the album to revise prevailing opinion about the Columbia albums as minor Stills.

You are an unconditional fan of STEPHEN STILLS (Buffalo Springfield/C.S.N & Y) ? Check if you have all the collection.
If you just want discover a little more, the list below will help you.