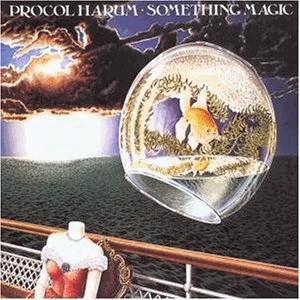 The final album from Procol Harum's original incarnation is also their weakest.  After the relatively straightforward rock sound of Procol's Ninth, Something Magic returns to the more ambitious art/symphonic rock stylings of the band's earlier albums.  The traditionalist formula works great over the first three tracks, from the melodramatic piano-driven 'Something Magic', to the laid-back symphonic rock of 'Skating on Thin Ice', to the country-ish rocker 'Wizard Man'.  It is those three songs that make Something Magic a worthwhile listen for dedicated Procol Harum fans, and I would say that this record actually has more standout moments than Procol's Ninth.  I would still hesitate to recommend this album to even the most starry-eyed admirers of the band, as the remaining tracks border on embarrassing.  'The Mark of the Claw' is a catchy melody that's ruined by loads of dated synths and odd sound effects, while 'Strangers in Space' is an abortive marriage of Gary Brooker's earthy vocals with an echoey space rock-esque arrangement.  The biggest offender here is undoubtedly still 'The Worm & the Tree'.  Procol Harum's first attempt at a multi-part extended piece since 'In Held 'Twas In I' (Shine On Brightly), that track stands as perhaps the worst progressive/symphonic rock epic from any established practitioner of the genre.  Although the full-blown symphonic rock arrangement is mind-numbingly boring, Brooker's spoken word narration is so ridiculous that the track would've been far better off as a straight-up instrumental.  The fact that the track takes up half the album at ~18 minutes is even more unbelievable, and convinces me that the band was completely out of ideas by this point in their career.

In short, Something Magic is a disappointing coda to a once-great career.  It still strikes me as an album that should've turned out much better than it did, as it probably isn't too many bad decisions away from being quite enjoyable.  I just doubt that the band had enough left in the tank to make the entire thing work.  Alongside Procol's Ninth, an album that is only appropriate for Procol Harum completists.  Everyone else is obviously way better off sticking to the band's first seven records.

You are an unconditional fan of PROCOL HARUM ? Check if you have all the collection.
If you just want discover a little more, the list below will help you.