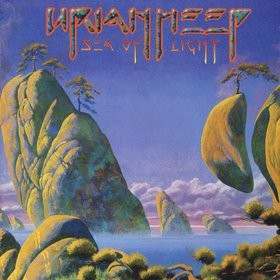 I don't know what happened to Uriah Heep, but I'm glad it did. This might be their best album since a very long time. Again we have a great fantasy picture (courtesy of Roger Dean) as a cover and Bernie Shaw's vocals mostly remind me of the classic Byron era. Guitarist Mick Box has some excellent partnership, especially regarding composition. Phil Lanzon aside some great keys and amazing bassist Trevor Bolder provides some killer song-writing and even vocals (Fear of Falling), while drummer Lee Kerslake is a reliable old guard of hard rock music. I think, this line-up is Mark II by importance for the band, even if chronologically it might be Mark XV even.
Against the Odds retains the old Heep albums' quality and style and it provides a minor highlight for the album, in fact it's among Heep's all-time greatest. This brand of progressive-minded hard rock is characteristic to the album. The keys are extremely fresh. Sweet Sugar is again Hammond-laden hard rock, Heep weren't this impressive since 1972, I guess. Great songs follow like Time of Revelation, the ballad Mistress of All Time, Universal Wheels, Fear of Falling with some very catchy riffs and verses. The simplistic Spirit of Freedom is a bit weaker. Logical Progression is a better simpler song, Love in Silence is a nice ballad, while Fires of Hell and the another ballad (the third great one) Dream On (not an Aerosmith cover) close the album of a high note.

This is a near-classic effort. It may be the band's strongest in nearly 25 years. Don't neglect it in any case.