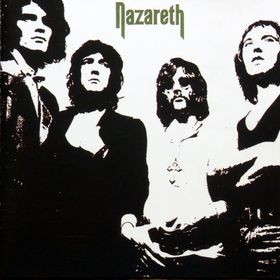 Nazareth, the greatest band of Scotland, and one of the most particular of the British hard rock in general, gets its debut with this eponymous album, that blends some Led Zeppelin with a quite revealing influence from the early Uriah Heep, in the guitar, some vocal arrangements, and the songwriting style. There is a considerable acoustic element in here, too; but for some reason is not annoying, at least not for me.
This album, of an obscure hard-psych, is pretty better than the lame and baffling second one “Exercises”; actually “Nazareth” is a quite competent example of the 1971’s hard rock of Albion. Alba for the case.
The opening “Witchdoctor woman” it appears as the most consistent track; though there are a couple more that do the trick as well (Empty arms, The king is dead).
Not bad, primitive, but with its robustness.

You are an unconditional fan of NAZARETH ? Check if you have all the collection.
If you just want discover a little more, the list below will help you.