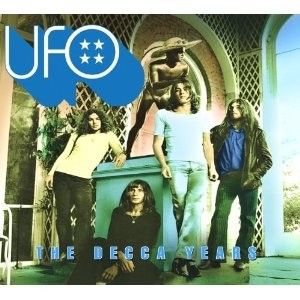 UFO is one of the UK's most spaced out rock bands of the Seventies and beyond. The now long established group was born way back in 1969 as Hocus Pocus, but when they changed the name to UFO, they became pioneers of a new sound, blending space rock with good time boogie. This double CD set flies us back to the early years, when the lads were signed to Decca and released debut album UFO 1 in 1970, followed by UFO 2 Flying - One Hour Space Rock in 1971 and UFO Live in 1972. They provide the source material for the 22 tracks on this essential Best Of collection, along with the A and B-sides of a pair of rare singles - Galactic Love b/w Loving Cup and Give Her The Gun b/w Sweet Little Thing . Rock history in the making, as we hear vocalist Phil Mogg in fiery form, backed by Mick Bolton(guitar), Pete Way (bass) and Andy Parker (drums). Watch out for great performances like Prince Kajuku , Galactic Love and Give Her The Gun , as well as epic extended arrangements of Star Storm and Flying . UFO went on to even greater things - but this is where it all began and rocked on. Booklet with authoritative and extensive liner notes written by respected Record Collector journalist Michael Heatley. Expertly remastered superb sound -top quality reproduction. The best in the business!

You are an unconditional fan of UFO ? Check if you have all the collection.
If you just want discover a little more, the list below will help you.