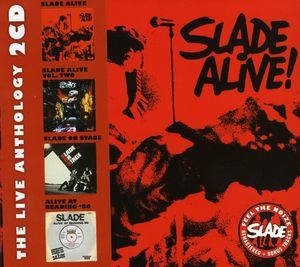 Although the American rock audience largely shrugged Slade away, the anthem-slinging hard rock quartet was positively huge back home in the U.K., in no small part due to the band's rep as a total live experience. This U.K. double-disc assembles the band's three live albums -- Slade Alive!, Slade Alive, Vol. 2 and Slade on Stage, then tacks on six previously unreleased tracks from their Slade Alive at Reading '80 performance. That's a lot of live Slade, but it's solidly packed with consistently strong, no-nonsense rock. The first live album, released in 1972 and the only one of the three to score chart points in the U.S., finds Slade in a transitional stage: having recently shed their skinhead look for one more in tune with the era's glam fashions, Slade had developed into a sizzling, audience-embracing performing band. Slade Alive! finds Slade one step removed from the pub rock boogie of bands like Humble Pie and Status Quo, and on their way to formulating a larger-than-life arena rock persona. Mixing choice covers like Ten Years After's 'Hear Me Calling' and Steppenwolf's 'Born to Be Wild,' with originals by lead vocalist Noddy Holder, Slade has already got their audience in thrall here. The quirkiest number is their take on the Lovin' Spoonful's ballad 'Darling Be Home Soon,' which starts out as sweetly as the original before cranking up the volume. By the time the second live album was released in 1978, much had changed in music. Punk rock was the rage, Slade's era as a steady contributor to the British singles and albums Top Ten charts had faded, and many young punters had no use for their like anymore. Ironically, much of Slade Alive, Vol. 2 was recorded in America in the fall of 1976, and while the rest comes from British performances in early 1977, Slade's star had fallen so far down by then that the album charted in neither country. Strange, because it's certainly the best of the three. With burning run-throughs of Slade trademarks like 'Mama Weer All Crazee Now,' 'Gudbuy T'Jane,' 'Everyday,' and 'Cum on Feel the Noize' (Slade had long ago taken to altering spellings in their song titles), along with a passable tribute to Elvis Presley's Sun Records era that fuses 'My Baby Left Me' with the uncredited 'That's All Right, Mama.' Even if the general public had lost interest, Slade's influence had spread far and wide enough to attract upcoming heavy metalhard rock musicians unencumbered by the trendy punk baggage of the day. Quiet Riot would eventually score a number one hit with 'Cum on Feel the Noize,' but before that Slade began a bit of a comeback as the so-called 'hair bands' looked to them for inspiration, and a new wave of Brits, embracing the New Wave of British Heavy Metal, saw Slade as forefathers. For sure, Holder's nuclear-powered screech was a prototype for countless shaggy maned frontmen to follow, and both Slade on Stage (from 1982), comprised almost entirely of original material both old and (then) new, and the 1980 Reading material, find Slade, by then a full-fledged metal outfit, as wound up as ever. After all, any band of heavy rockers that could get an audience of drunken rowdies from Newcastle to croon the old standard 'You'll Never Walk Alone,' a cappella, en masse, pretty much owned their audience

You are an unconditional fan of SLADE ? Check if you have all the collection.
If you just want discover a little more, the list below will help you.