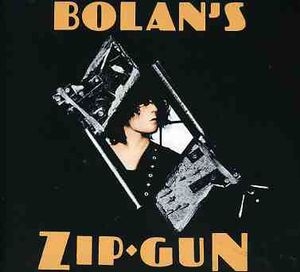 Having reinvented himself as a bionic soulboy across the course of 1974's Zinc Alloy, Zip Gun was less a reiteration of Marc Bolan's new direction, than a confirmation of it. Much of the album returns to the understated romp he had always excelled at: The delightful knockabout 'Precious Star,' the unrepentant boogie of 'Till Dawn,' and the pounding title track all echo with the effortless lightheartedness which was Bolan at his most carelessly buoyant, while 'Token of My Love' is equally incandescent, a playful blues that swiftly became a major in-concert favorite. But the essence of Zip Gun remains firmly in the funky pastures which characterized Zinc Alloy, with the only significant difference lying in the presentation. Out went the plush production which so diluted the earlier set, to be replaced by a sparser sound that emphasized the rhythms, heightened the backing vocals, and left rock convention far behind. 'Light of Love,' 'Golden Belt,' and the heavyweight ballad 'I Really Love You Babe' may not be Stax-sized attractions, but they have an earthy authenticity nevertheless, while bonus tracks on the Edsel remaster include single-only stabs at 'Dock of the Bay' and 'Do You Wanna Dance,' further indications of just how seriously Bolan was taking his new role -- and how far he'd moved from the bopping elf of three years earlier. The difference was, in 1972, Marc Bolan was a god. By 1975, he was barely even a minor deity. It was, of course, the old, old story. When he made records that sounded like the old ones, the kids all complained he'd stagnated and lost it. When he made records that didn't sound like them, then they moaned even louder that things just weren't the same. So he made ones that fell smack between the two poles, and that wasn't right either. And yet, played back to back alongside the 'classics,' there ain't much wrong with any of them. Whatever was the fuss all about, then? Decades on, each of Bolan's latter-day albums retain a hint of their original controversy, but hindsight lends them an impact (and, for what it's worth, a credibility) which contemporary listeners could never have imagined. And Zip Gun, an album which scored the worst reviews of all, hits as hard as any of them. [In 2002, T. Rex's catalog was reissued, and this disc was given extra special treatment. Including the previously mentioned bonus tracks 'Do You Wanna Dance?' and 'Dock of the Bay,' the album also offered a second bonus disc that featured alternate takes of every track from the album featured in the same order, alternate takes of the two bonus tracks mentioned above, and extra outtakes of 'Solid Baby,' 'Girl in the Thunderbolt Suit,' the original version of 'Golden Belt' (called 'Dishing Fish Wop'), and three more versions of 'Till Dawn.' These were often looser and less structured versions, but also quite fun and effective because of it.]