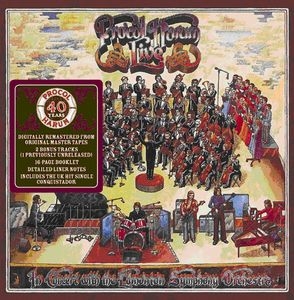 In Concert with the Edmonton Symphony Orchestra ( remastérisé * + 2Bonus Tracks)

This whole album was an afterthought -- Procol Harum had been invited to play a concert with the Edmonton Symphony Orchestra and the Da Camera Singers in Edmonton, Alberta, Canada, in August of 1971, at the tail end of their last tour with Robin Trower in the lineup. Amid all of the preparation -- including the writing of new orchestral arrangements by Gary Brooker and with a new lead guitarist, Dave Ball, just joining the lineup -- Brooker decided that it might be a good idea to preserve a professionally made tape of the show and suggested that A&M Records, to which they were signed, might want to record the performance; the label agreed with just a week to go until the concert. Even 'Conquistador,' the song on which the resulting album's commercial success was built, was added at the last minute, with no time for the orchestra to rehearse the arrangement that Brooker wrote on the flight from England. They did it cold, opening the concert, and the eventual album featured a performance -- highlighted by the orchestra's brass in a Spanish mode, running scales on the strings, and B.J. Wilson's powerful drumming -- that helped loft the single to number 16 in America. The group's second-biggest hit record (after 'A Whiter Shade of Pale'), in turn, helped lift the album into the American Top Five. Ironically, the success of the LP also left Procol Harum's image slightly askew, with the presence of the orchestra and choir and the selection of songs, from the most ambitious part of the band's repertoire, all combining to present Procol Harum as more of a progressive rock act than they actually were. 'Conquistador' was the most accessible song on the album, and nothing else here matches it for sheer, bracing excitement, but the rest -- especially 'Whaling Stories,' 'A Salty Dog,' and the multi-part 'In Held 'Twas I' -- was all opened up by the vast canvas provided by the orchestra, and the group didn't wimp out in its own performance; Wilson, Ball, Brooker, and company all played hard and heavy where the songs required it. [Long out of print on CD, Procol Harum Live: In Concert with the Edmonton Symphony Orchestra was finally reissued in August of 2002 by Repertoire Records in a newly annotated edition with one bonus track, 'Luskus Delph,' which was recorded at the same show and previously issued only on vinyl as a U.K. single B-side.]

You are an unconditional fan of PROCOL HARUM ? Check if you have all the collection.
If you just want discover a little more, the list below will help you.