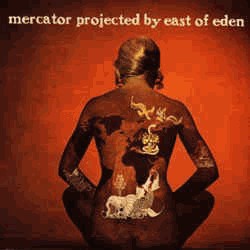 The seaside resort of Brighton, England, is forever twinned with the bank holiday battles between the mods and the rockers, thanks in no small part to the movie 'Quadrophenia'. But this popular shore town's biggest attraction wasn't merely the meeting of two opposing youth cultures, but its Pavilion, a wildly exotic 19th century structure that brought the mysteries of the East to merrie Englande. For East of Eden, formed in Brighton in 1968, it obviously sparked a love of foreign parts, a love they brought directly into their prog rock sound. After releasing a single on Atlantic, the quintet moved to the Decca label's progressively inclined subsidiary, Deram, which released their debut album, Mercator Projected, illustrated by a clever cover that projects Mercator's map onto a bare woman's back, overlain with exotic tattoos. And Eden's sound was indeed all over the map; screaming jazz sax solos, soaring flute, Bartók-inspired violin, storming hard rock, pastoral visions, lashing R&B, medieval fairs, modern jazz, and ancient rituals brought back to life, this wasn't so much prog rock as a whole new realm of music. Eden were extraordinarily popular on the London underground scene, and one can see why. Even on the shorter numbers on this album, the band embarked on excursions into the unknown, flickering through centuries and cultures, with dramatic shifts not just between songs but within them. Only 'Northern Hemisphere' sports a more traditional structure, which is why it was spun off on a single. This reissue adds two startlingly sparse (considering the finished product) demos of album tracks, as well as a stunning and previously unreleased cover of the Byrds' 'Eight Miles High.'