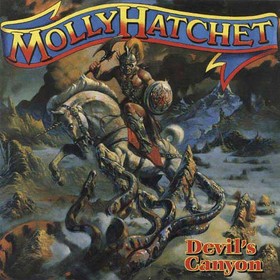 After a long hiatus Molly Hatchet is re-born and puts out their strongest album since No Guts No Glory from '83. Some people complained, yeah there's a new singer and a constant revolving door line-up but the fact is this band has had so many people in and out of it since day one most people can only name their original vocalist Danny Joe Brown so what does it matter someone else is playing the bass? I never understood supposed fans who complain that some musicians keep releasing new music...we live in a world where radio is corporate controlled and computer programmed to play the same material over and over ad nauseum...I was telling a buddy of mine I haven't listened to Led Zeppelin II in 25 years...that's a quarter of a century because I'm sick of everytime I turn on my car whether it is to go to my job I'm sick of, or my wife I'm sick of, half the time I gotta hear 'Whole Lotta Love' which seems to be playing on classic radio 24-7 anywhere in the U.S., either that or 'More Than a Feeling'...20 years ago this album would've been huge here, most of these songs at the very least could've been anthemic rock classics or even hit the charts...unfortunately as I said with stale radio and music video channels that don't play music videos anyways, all bands like Hatchet can do is tour and release albums for an unappreciative audience that'd rather sit on their asses and whine the band just isn't the same when in reality the only Molly they know is 'Flirtin' with Disaster' and maybe 'Gator Country'. New singer Phil McCormick is worthy successor (hand-picked by Brown...so any naysayers that keep whining that they should retire, evidently Danny didn't think so). Bobby Ingram guitarwork is subperb, and the band going slightly in a heavy metal direction while still standing firm on their Southern rock base. You got Southern rock epics chock full of smoking solos such as the title track and 'The Journey', ballads like 'The Look in your Eyes', hard rockers like 'Tatanka', 'Rolling Thunder', 'Down from the Mountain'...great album, thank God for Bobby Ingram and Molly Hatchet keeping Southern rock alive. Anyone that doesn't like them piss off and go listen to whatever shit classic rock station you have...let me guess, they're playing either 'Whole Lotta Love', 'More Than a Feeling', 'All Right Now', 'Bohemian Rhapsody', or 'Smoke On the Water'? Right? Wrong? Ok, 'Paranoid' then, right? I knew it.