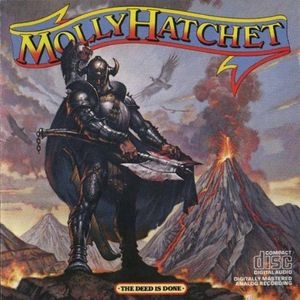 'The Deed Is Done' is something of an unusual piece in Molly Hatchet's discography, the Southern boogie and swagger of previous albums hasn't been totally exorcised from the band's sound, but it almost seems like they were trying. I mean, Southern rock took a noticable beating in the 80's, what with the flagship bands in the 70's either gone or decaying, the second-tier bands taking the torch and in general the listening audiences' indifferent attitude towards the genre all contributed to something 'fishy' in this band. Just listen to these songs, they're lacking noticable grit and edge, they've been cleaned up. Hell, this is the same thing that happened to ZZ Top in the 80's.

That doesn't necessarily mean its bad though. This batch of songs suffers from a lacking guitar tone, that familar heaviness and crunch present before has been cleaned within an inch of its life. Danny Joe Brown sounds less like a bar room brawler barking orders to his comrades and reveling in tales of debauchery and life in the fast lane, and more like a typical 80's rock singer. More flash, flair, and studio gloss has been added to the mix. I'm almost shocked the band didn't show up in leather, lace, and make-up and challenge Motley Crue to a runway show.

That aside, I can't really find a problem with these songs. Some of them seem to lack discernible character, not that such character was ever really present in their albums. 'Satisfied Man' is pretty cool, though obviously less swagger and less grit than before. I keep thinking 'usual 80's mainstream rock sound' here, think early to mid-80's ZZ Top aka 'Eliminator' and you're pretty dead on with some obvious differences. 'She Does She Does' has trumpets, even. Nothing wrong with trumpets, since the song is actually good. 'Straight Shooter' and 'Good Smoke and Whiskey' are also pretty decent.

I can't hate on ol' Hatchet for this, the band is doing pretty well here. I must say I find this a tad disappointing simply because there are times it doesn't sound like Hatchet at all. I know its them because of Danny on vocals, but seriously, this isn't a Hatchet record, at least not like their casual fans will think it is. A good album, just not something I reach for when I want some Molly Hatchet to blare out of my speakers.