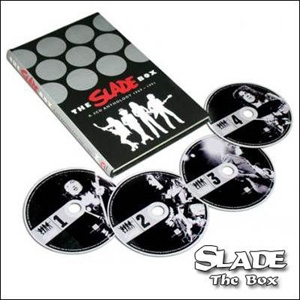 The problem with Slade is, when they were good they were so very, very good that it becomes very difficult to pay much attention to the rest of their career. Of course the average fan will happily listen through their first two albums, cut in the years before 'Get Down Get with It' finally catapulted Slade into the charts, and it's impossible for anybody to take exception to the four years of classic hits, dynamic album tracks and brilliant B-sides that followed. Drop in on Slade circa 1976, however, and listen through the music that sustained them across the next 15 years, and nobody would blame you if you didn't hang around too long. Which means, sadly, that anybody buying The Slade Box as any kind of substitute for the earlier albums (or a decent greatest-hits collection) is in for something of a disappointment. No complaints with the track listing, though. Across 84 tracks, Slade's entire catalog has been cherry-picked for precisely the right songs to illustrate a career of their depth and dynamism. But when the strict chronology means you hit 'Merry Xmas Everybody' at the end of disc one; and 'In for a Penny' (the last truly major hit) by midway through disc two, that means there's an awful lot more to listen through before the four discs are at an end. And it really is too much, no matter how much you love the band.
The worst thing is, this could have been a must-have purchase. At least one disc's worth of prime-period B-sides could have been scattered throughout; there's a clutch of BBC sessions rattling around the collector's circuit, and a mass of U.K. and European TV appearances that could have brought something really special to the box set table. And that's long before we start wondering about demos and outtakes and the like. Of course, a democratic trawl through the band's entire catalog is no less than Slade deserve, and history will thank Union Square for finally giving the later years a fair crack of the whip. The booklet is wonderful, the packaging attractive and the sound quality is superlative. But, if you never felt the need to own Keep Your Hands off My Power Supply and You Boyz Make Big Noize in the past, you're not going to welcome them here, either.

You are an unconditional fan of SLADE ? Check if you have all the collection.
If you just want discover a little more, the list below will help you.