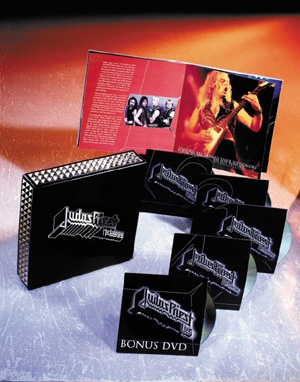 Few bands captured the kinetic energy of the New Wave of British Heavy Metal as effortlessly as Judas Priest. In an era that saw the decreasing popularity of bands like Deep Purple and Black Sabbath, the Birmingham quintet saw opportunity. Their volatile mix of searing metal, progressive rock, new wave, and blue-collared bar band brutality drew fans from every genre. While their influence on the hair metal renaissance of the mid- to late '80s is undeniable, it's this early work that helped mold seminal groups like Metallica, Iron Maiden, and Mötley Crüe. Sony/Legacy's career-spanning, four-CD box set Metalogy -- nestled in a dog collar-studded case -- is the first collection to chronicle the entire history of the band, from its 1974 debut to the Tim 'Ripper' Owens-led Demolition. Discs one and two of the 65-track onslaught focus on the group's electrifying metamorphosis from chiffon-wearing, Gull Records recording artists to the leather-and-gun metal force of nature that redefined heavy metal during the late '70s/early '80s. The differences between the forgettable Rocka Rolla and the prog rock epic Sad Wings of Destiny are jarring, showcasing a band that couldn't decide whether or not it wanted to emulate Nazareth or Queen. Thankfully, it's the latter that prevailed, and what followed was a Bowie-esque transformation that united both rockers and mods with a hidden fetish for the glam rock sensibilities of the era, and it wasn't long before the fantasy-rock musings of songs like 'Tyrant' evolved into motorcycle/sex rave-ups like 'Breaking the Law' and 'Livin' After Midnight.' 1980's British Steel and its predecessor, the often overlooked Hell Bent for Leather, were milestone recordings for the group as well as the genre. Hell Bent was the more diverse of the two, yielding Zeppelin-esque fury on 'Evil Fantasies' and a healthy dose of Roxy Music on the almost danceable 'Killing Machine,' but it was British Steel that broke the band in America, a success that was doubled by 1982's Screaming for Vengeance. Producer Tom Allom knew the group's strengths and focused his attention on the blistering twin-guitar assault of K.K. Downing and Glenn Tipton, as well as harnessing Rob Halford's netherworld shriek, wrapping it in a laser precision coat of flange and delay. It's that delay-heavy vocal sound mixed with Halford's peerless scream that can be heard emitting from the throats of successive artists such as Perry Farrell and the late Jeff Buckley. The '80s were good to Priest, providing them with the fame and fortune they so richly deserved, but it wasn't long before their fans began to question their motives. Metalogy earns points for including two discs of material from these later records, and there is a great deal of bounty to be had; however, the downward spiral that saw Halford and longtime drummer Dave Holland leaving the group at the dawn of the '90s hurt both their fans and their music. While 'Freewheel Burning,' 'Parental Guidance' -- still a surprisingly sweet teenage anthem -- and 'Ram It Down' rank among their finest works, tired filler like 'Come and Get It' and 'Jugulator' -- the latter features Halford's replacement, former Priest cover-band frontman Owens -- have no place on this collection despite their fulfillment of a linear time line. Also, the inclusion of 'rare' live tracks of monumental recordings like 'The Hellion/Electric Eye' and 'Breaking the Law' should have found themselves on an all-live disc five, leaving room for the original recordings. These gripes aside, Metalogy is a fully realized body of work, and the remastering alone is worth the occasional indulgence. Priest were always more science fiction than hellbound, and this remarkable retrospective does a lot to dispel the P.M.R.C. accusations of 'deviltry' and suicide-enabling that they suffered in the '80s. The accompanying booklet tells a different story, one that concerns five young men from an industrial town in England, who, like Black Sabbath before them, wrote and played in a style that reflected what they saw when they looked out their windows: smoke, rain, and an endless sea of metal.