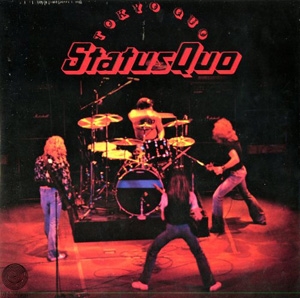 Sometime in 1977, the Quo released a live album that was exclusive to Japan and for some reason has never been treated as part of the true Quo canon. I mean, a live album from the band's heyday that has never seen a full release outside of Japan? Is There a Better Way taken from this album was released on the Rockers Rollin': Quo in Time 1972 - 2000 boxset, but that's it. And it's hard to see why really. Sure this is sloppy in places, but then so is Live!, which is part of its charm. But a few years ago the Stockholm 1971 radio gig was due for an official release but was cancelled because Rossi and Parfitt felt it was too sloppy. At least that was the reason I heard.

So here you have a truncated November 1976 gig recorded in Japan and to be honest I prefer this to the Live! album because the tracks here are heavier with Lancaster's bass really having more presence. Tracks like Is There a Better Way, Little Lady, Most of the Time, Rain and Bye Bye Johnny really do trounce the Live! versions for heaviness, though the mix is a little murkier and Parfitt's guitar is sometimes a little buried. Roll Over Lay Down and Don't Waste My Time don't offer any real improvements though they're probably the equals of the countless other versions of these songs that are available.

The only two real mis-steps are a particularly ropey rendition of Caroline and Big Fat Mama, which is going OK until Parfitt's guitar suddenly drops out during the solo after a couple of strange, strangulated notes. I'm not sure what happened here - maybe a string broke? Maybe his lead got pulled out? Maybe he fell over? Maybe he decided he wanted a fag instead. I dunno. It's not enough to ruin the song, though I can imagine the band looking back on that moment and cringeing.

Either way, this album deserves to be treated as part of the official Quo discography and get a wider release as its a perfect companion to the other 1977 Live album available in the rest of the world. In fact this is probaby Quo's heaviest release and deserves wider recognition for that fact alone.