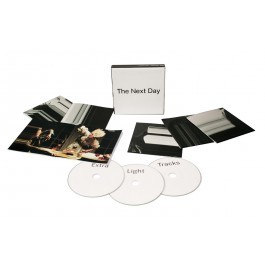 Disc one is the original 14-track album.

Disc two is a ten-track ‘companion CD‘ which includes the three bonus tracks from the original deluxe edition (So She, Plan and I’ll Take You There), the Japanese-only bonus track (God Bless The Girl), two remixes (Love Is Lost and I’d Rather Be High) and four previously unreleased tracks (Atomica, The Informer, Like A Rocket Man, and Born In A UFO).

Disc Three is a DVD featuring the four videos made for the songs Where Are We Now?, The Stars (Are Out Tonight), The Next Day and Valentine’s Day.

You are an unconditional fan of DAVID BOWIE ? Check if you have all the collection.
If you just want discover a little more, the list below will help you.