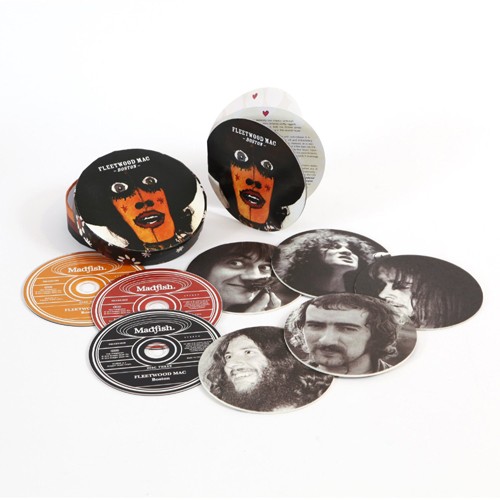 3CD Set in round box remastered vintage live recordings of Peter Green's Fleetwood Mac. Earlier this year the current incarnation of Fleetwood Mac embarked on a massive world tour. Dates in North America are being followed by gigs around Europe, Australia and New Zealand. These dates will see the band playing sold-out shows to huge arena crowds and are sure to create another surge of interest in this much-loved band. Boston is a 3CD set which collects live recordings from an earlier era of the band's colourful history. The set features the classic blues line-up of Mick Fleetwood, Peter Green, Danny Kirwan, John McVie and Jeremy Spencer. Originally recorded at the Boston Tea Party venue over three nights in February 1970, for a planned release later the same year, these recordings were left in the can, unissued, following leader Peter Green's sudden decision to leave the band a few weeks after the dates. Tracks from the shows were eventually released in various forms in the mid-80s but these releases were blighted by poor sound sources. The discovery of the original 8-track tapes and a number of previously unreleased tracks in the late 90s allowed the material to be re-mixed, re-mastered, and substantially overhauled for release on 3 separate CD volumes. This new set brings together all of these re-mastered recordings a 3CD set to present a complete document of these historic shows. The set is packaged in a round box with a 24 page book and 5 beer mats. The booklet contains new sleevenotes and reworked artwork.