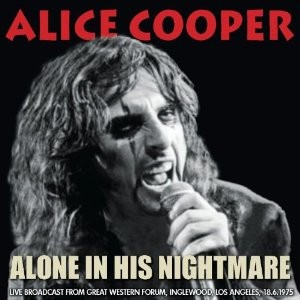 Alone in His Nightmare Live 1975

1975 Live Alice Cooper Broadcast never before released Fm Broadcast of one of Cooper's earliest solo shows Upon its release in February 1975, Alice Cooper's debut solo album (his band of the same name had recently split) Welcome to My Nightmare topped album charts around the world, and firmly established the lone Alice as a true star. A concept album based on the horrific dreams of a child, it was produced with its potential stage adaptation in mind as much as its physical release, and it fully realised Cooper's lurid vision. Typically, a live adaption would climax with the decapitation of an 8ft Cyclops. When the tour reached The Great Western Forum in Inglewood, Los Angeles, on 18th June '75, the venue not only played host to this theartical extravaganza, it also acted as HQ for a live broadcast of the evening's proceedings which would be heard across the United States in superb FM quality for all - or at least those inclined - to hear. The body of the performance is of course taken from Welcome To My Nightmare, but Alice was quite aware the crowd wanted to hear a few established classics too, and so rousing versions of 'No More Mr. Nice Guy', 'I'm Eighteen', 'Billion Dollar Babies' and - of course, being a summer show - 'School's Out' peppered the set accordingly. This CD contains the full broadcast made on that hot June night some 37 years ago, and while few would argue that Alice Cooper was not amongst the finest showmen of the Rock age, the recording here reminds us that at this juncture in his career he was quite possibly the finest performer alive.