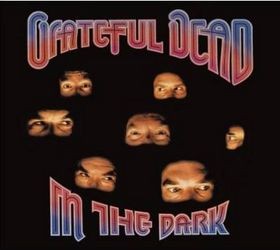 The Grateful Dead finally seemed to break the studio jinx with 'In The Dark', their highest charting album. Such a result was not totally unexpected as a good number of the songs were written around 1982 and the band had about five years to hone them live prior to going into the studio. Perhaps that should be four years as Jerry Garcia's health suffered considerably in the mid eighties, as he slipped into a near-fatal diabetic coma in 1986. Still, the Dead appeared to have lost some of their original mystique after finally garnering a top ten album and single. 'Touch Of Grey' is a fine song celebrating (or perhaps tolerating) the passing of time, while other fine standouts include 'Hell In A Bucket', 'West LA Fadeaway', 'Black Muddy River' and 'Throwing Stones'. Owning the cassette version, I also have the privilege of having 'My Brother Esau' in my collection. The only weak bit was 'Tons of Steel', written and sung by keyboardist Brent Mydland, which would provide a prescient look at his dominating the succeeding album and succumbing to a drug overdose in 1990. While not on the same scale as 'Workingman's Dead' and 'American Beauty', 'In The Dark' is a fairly impressive work and their last potent...if you can call it that....studio release. Roll, muddy river...roll on forever....