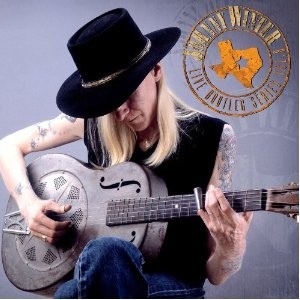 Legendary rocker and blues statesman Johnny Winter continues to enthrall audiences the world over. With his unique brand of blues/rock guitar and vocal prowess, Winter’s style is truly unmatched in purity and in star power longevity. While he tours non-stop, it’s no secret that his live performances are legendary. Fortunately for his huge fan base, Johnny has captured a lot of his concerts on tape over the many decades, which proudly leads us to the latest installment of the chart topping Live Bootleg Series.

For Johnny Winter’s Live Bootleg Series Volume 8, the artist surely becomes his instrument in some incredibly guitar shredding live performances. The blues wielding axeman steps out with super extended workouts on concert classics like his masterful version of the Freddie King classic 'Tore Down,' fan favorite 'Give It Back' and a super long jam on the classic 'Have You Ever Loved A Woman.'

Always paying homage to his fellow bluesmen, Johnny also dug far back into his archives for two super rare performances of his favorite Elmore James’ classics 'Stranger Blues' and 'Done Somebody Wrong.' An astute master of the blues rock genre, Johnny closes out the album with an incredibly rockin’ interpretation of Chuck Berry’s 'Roll Over Beethoven.'

Friday Music is very honored to be the home of Johnny Winter’s Live Bootleg Series Volume 8. As with their previous releases, these are totally authorized and owned/controlled by Johnny Winter himself. For this super limited edition audiophile vinyl release, Friday is offering a truly hip two LP white color vinyl presentation, including all the great songs from the killer compact disc. The release also boasts a very rare gatefold cover featuring the great album cover photo from Paul Natkin, as well as Johnny’s good friend, producer and guitarist Paul Nelson’s penned liner notes.